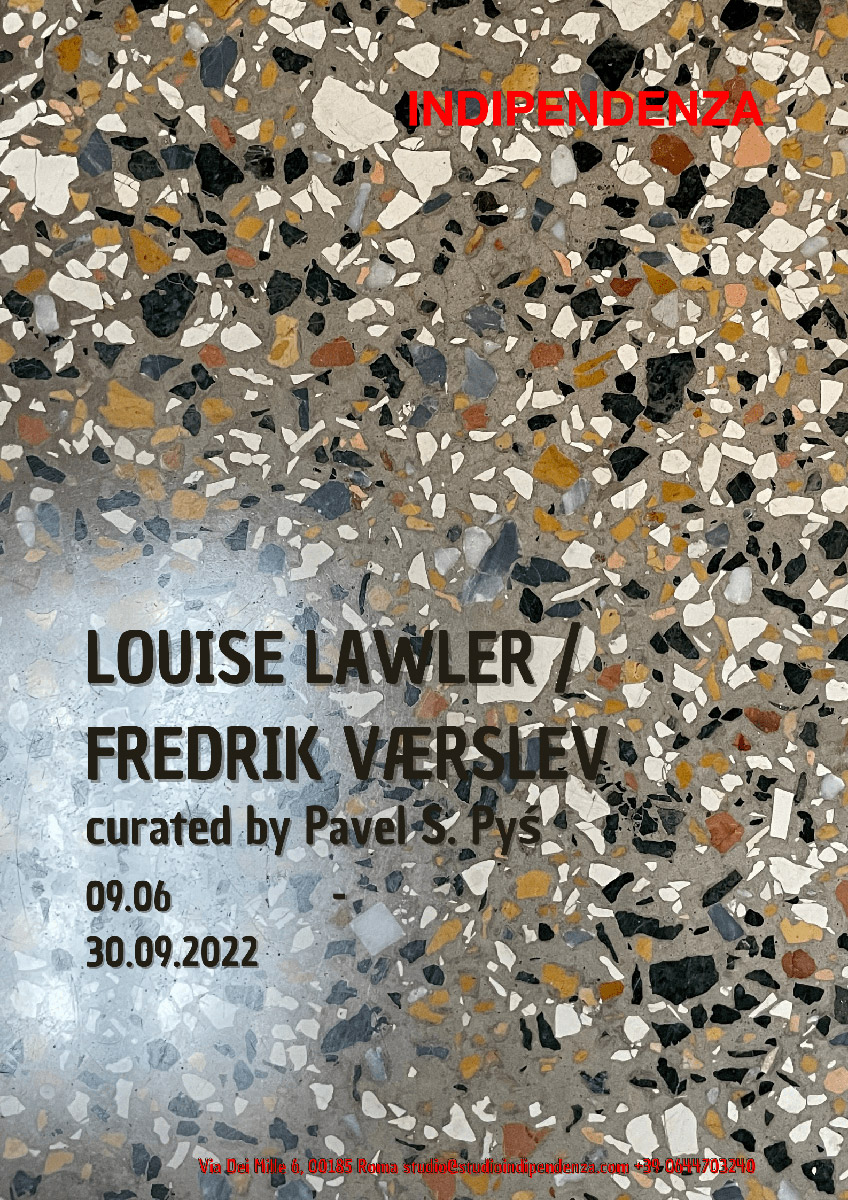 Indipendenza Roma is proud to present Louise Lawler / Fredrik Værslev, a two-person exhibition that responds directly to our unique spaces to explore the tension between an artwork and its surrounding architectural context, spurring questions of taste, value, function, and decoration.

Louise Lawler’s incisive practice brings to the fore the very means by which value and significance are conferred upon artworks. Her works reveal the mechanisms by which art is produced, reproduced, consumed and sold to question how we understand issues of authorship, connoisseurship, and meaning. The exhibition presents examples of the Tracings (2013-present) and Adjusted to fit (2010-present) series, which have been scaled and sized in response to Indipendenza’s walls. The Tracings were created on the basis on the artist’s iconic photographs and realized with children’s book illustrator Jon Buller, who traced the outlines of each image, which were then converted to vector graphics and printed on vinyl that adheres directly to the wall. Adaptable and made manifest solely upon exhibiting, the Tracings emphasize the malleability of the image, becoming almost abstract drawings when seen up close, and recognizable as images when seen from afar. Alongside are a number of Paperweights (1988-present) in which Lawler’s photographs are trapped under crystal domes as if small trinkets or museum shop souvenirs. Within Lawler’s works we catch glimpses of domesticity: a tureen sits in front of a Jackson Pollock painting, elsewhere a Lucio Fontana canvas hangs below a chandelier. Seen within Indipendenza’s rooms, that once served as an apartment, Lawler’s works draw our attention to hierarchies of taste and value that command how we arrange, and, ultimately, present our lives to others.

Deeply invested in the relationship between painting, architecture, and both urban and suburban environments, Fredrik Værslev’s serial practice reflects on the conventions, styles, and limits of abstract painting. Throughout his work, Værslev consistently defers the final appearance of his works to processes beyond his own control, creating paintings that are weathered outdoors during the passing of the seasons, subjecting canvases to blooming mildew, or destabilizing his mark-making by employing unpredictable tools. For this exhibition, Værslev has created a new series of site-responsive paintings (2021-22), which are sized to match the doorway dimensions and informed by the palette, materials, texture, and imagery that characterize Indipendenza’s spaces. These trompe l’oeil terrazzo paintings mimic the pattern and treatment of the gallery floor designs, yet are marked with drips and swirls suggestive of the ceiling frescoes that interrupt the all-over treatment, playing on the tension between background and foreground, function and decoration, real and faux. Long fascinated with everyday furnishings that punctuate our built environment – canopies, window frames, patio furniture – Værslev seizes on their material qualities as a means to question how a painterly gesture crystallizes into a recognizable motif or signature style. Created entirely during the pandemic and its various stages of enforced lockdown, this new series of works offers both an echo and coda to the ‘terrazzo paintings’ that Værslev become first recognized for a decade earlier.

Seen together, works by Lawler and Værslev point beyond their own limits, drawing our eyes to their surrounding spaces, asking how an artwork’s context can frame its meaning and vice versa.

The exhibition is accompanied by a forthcoming catalogue published by Lenz Press, Milano.

Lives and works in Brooklyn, New York. Her work is currently on view in The Milk of Dreams, the 59th International Art Exhibition – La Biennale di Venezia (2022), curated by Cecilia Alemani. Selected solo exhibitions include :

Twice Untitled and Other Pictures (looking back);

Louise Lawler and Andy Warhol: In and Out of Place;

Lives and works in Oslo and Vestfossen. He is a professor at the Malmö Art Academy where he finalized his MFA in 2010 including studies at the Städelschule in Frankfurt am Main.